Like much of the country, we’ve been getting lots and lots of snowfall in the Rockies this winter.  A few weeks ago, many of our planning colleagues started passing around a couple blogs from Jon Geeting of This Old City that looked at what all this snow could be telling us about public spaces and traffic safety improvements in a neighborhood in South Philadelphia. As Geeting puts it:

If you haven’t heard of a “sneckdown” yet, it’s a clever combination of “snow” and “neckdown” – another name for a curb expansion – that uses snow formations on the street to reveal the space cars don’t use. Advocates can then use these sneckdown photos to make the case to local transportation officials that traffic calming interventions like curb bumpouts and traffic islands can be installed without any loss to car drivers.

Geeting took photos around his Philadelphia neighborhood to illustrate the point, and so we wondered, would we find the same in our mountain town of Glenwood Springs, Colorado?  So, we headed out the door of our office to see what the snow what was telling us about what the cars were utilizing, and what they weren’t.

To our delight, the snow revealed some great traffic calming ideas that could be implemented in our downtown. At the intersection of 7th Street and Grand Avenue, near Glenwood Springs’ popular “Restaurant Row,” there are several parking spaces that appear to be underutilized given the lack of tire tracks and ample space around the corner where the snow remains untouched.  This is great news as concern has been expressed over the recent plan to expand the sidewalk and remove some of the parking spaces along this stretch of the downtown.  Imagine how much more sidewalk there will be: 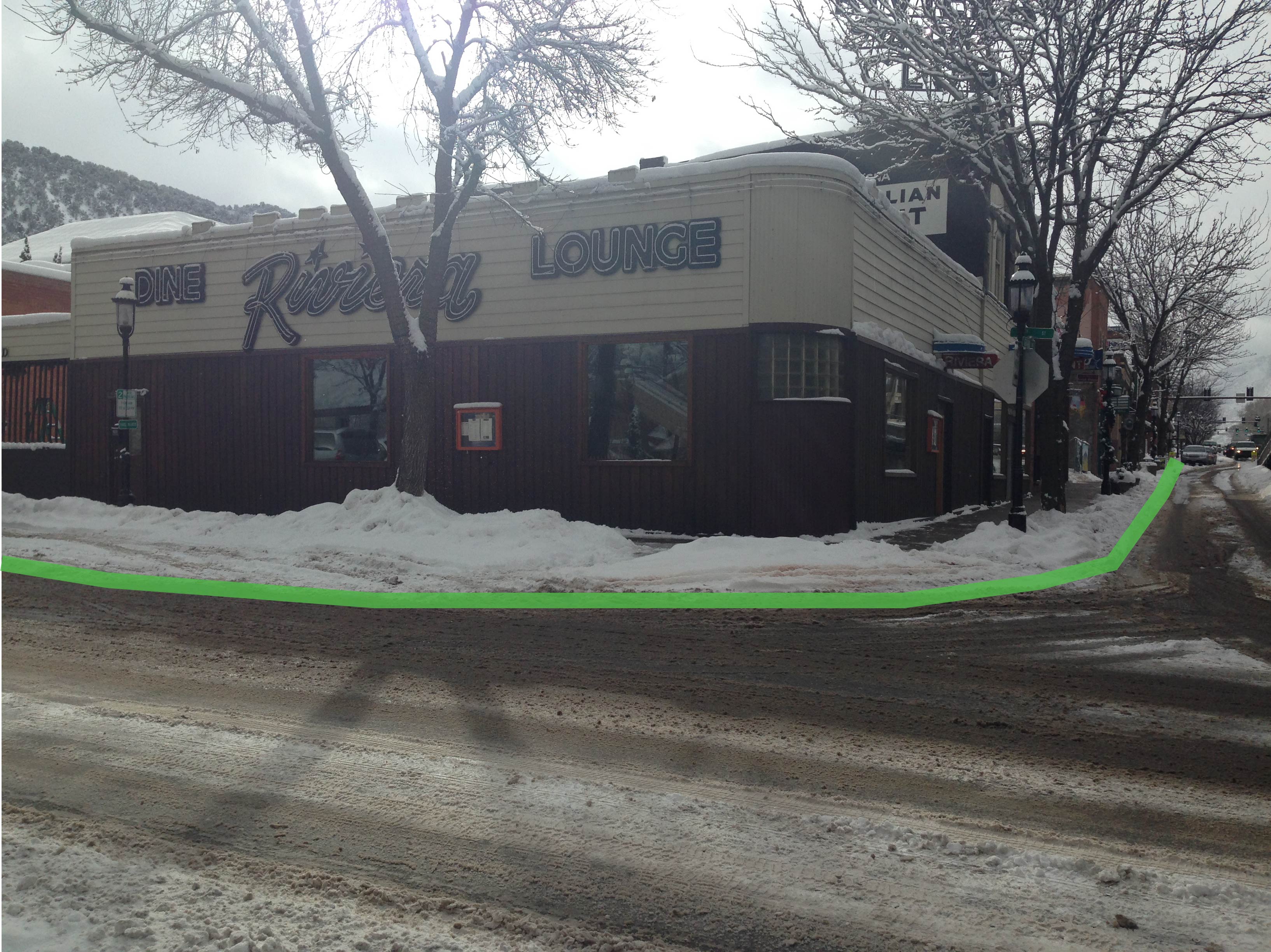 Here’s another downtown intersection where there is a predominance of office buildings, where again we see evidence of underutilized street parking: 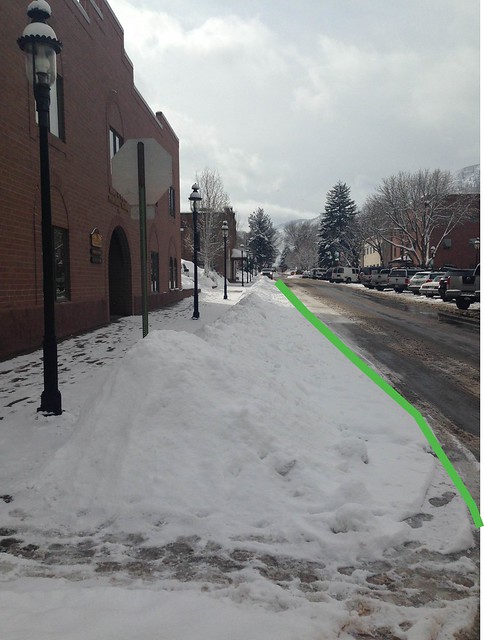 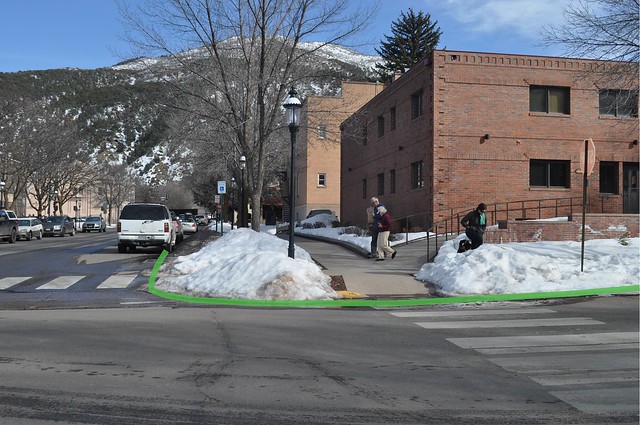 The snow formations reveal that this intersection could feature bump-outs without taking away any travel lanes or parking spaces from motorists. Here’s the corner adjacent to the post office at 8th Street and Pitkin Avenue, down the street from our offices: 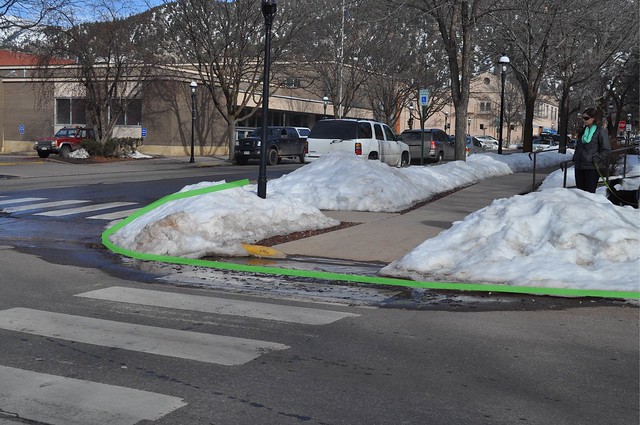 This corner could feature a similar bump-out. There’d be some room for street furniture and planters, making this intersection a much greener and happier place for the abundance of office workers in the area: 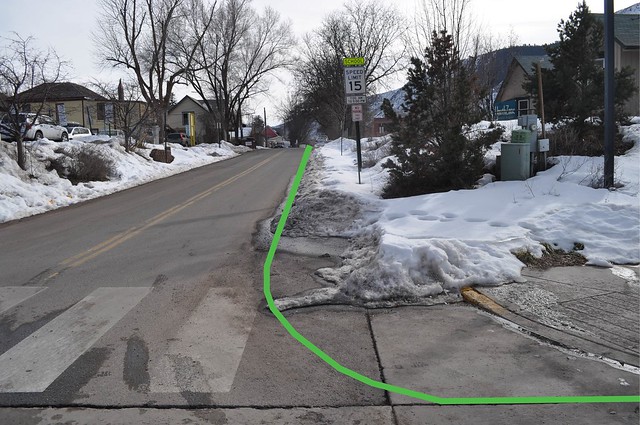 We also observed some obviously missing connections between the downtown and the neighboring residential neighborhood to the west by seeing these footpaths through the snow: 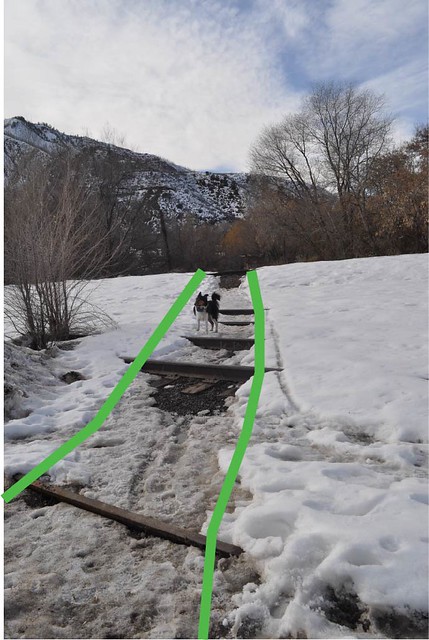 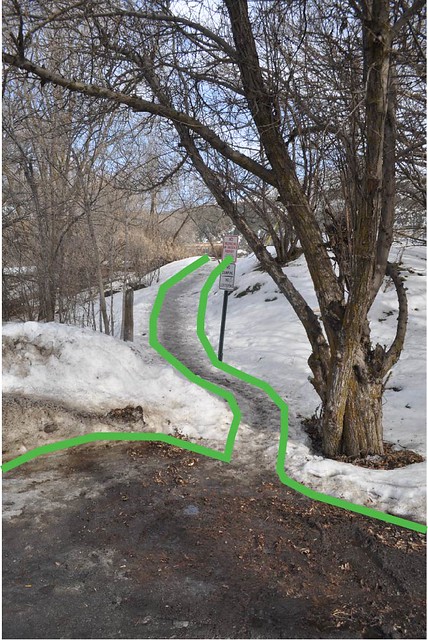 Geeting makes the point in his article:

The point isn’t that none of these ideas would be controversial (people like to drive fast, and these interventions make them drive more slowly), but the political bar is much lower because most of them don’t take away any space anyone is actually using.

There are existing great examples of these bumpouts at some of the intersections in Glenwood Springs, as seen in the photo below. These are relatively cheap, high-impact projects that can be done quickly, and tend to be extremely popular after they are built. Once businesses see how nice they look, and how much more spontaneous foot traffic they bring in, they tend to dispel the worry about lost space for vehicle traffic.

This spring Glenwood Springs is undergoing a sidewalk extension and streetscape project along popular 7th Street, deemed Restaurant Row for the many popular restaurants, which will continue to add to our small town’s ambience, public space and pedestrian-friendliness. 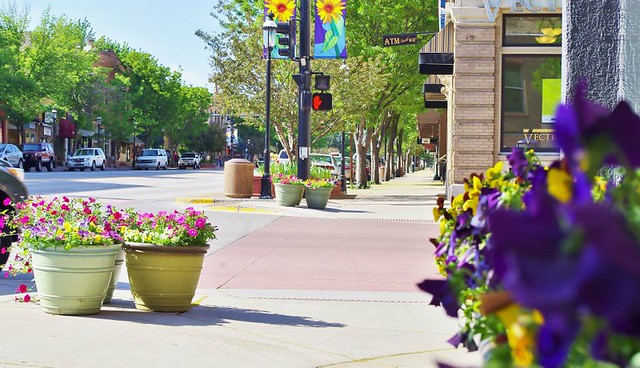 Where has snow shown opportunities for additional public space in your community this winter? Taking the time to do even a 5-minute visual survey can tell a lot.

4 Reasons Why Your Community Needs to Embrace Biking

Get the latest updates about how communities in the West are navigating the COVID-19 crisis and planning for recovery.