Known for their outdoor recreation accessibility and amenities, mountain towns bring people from all over the country to experience the outdoors. But any permanent town resident can tell you that, with tourism, comes a significant economic issue—housing affordability.

The town of Durango, Colorado is no exception to this trend. However, the small city views itself differently from other resort communities.

“Durango is in a unique position because we have a lot of qualities of a resort community with a lot of tourism activity, but we’ve also been able to retain a year-round economy,” Scott Shine, the Planning Manager for the City of Durango said. “We want all different socioeconomic profiles to be able to live here and find work, so protecting housing units for long-term residents and not just tourists is a huge component of that.”

With pressure to accommodate these differing demographics, Durango has effectively implemented various strategies to buffer the rising cost of housing over the past five years. Of these strategies, the city has gained the most recognition for updates made to their accessory dwelling unit (ADU) policy.

An ADU is a secondary housing unit on a single-family residential lot. They go by many names, such as—accessory suites, mother-in-law units, or granny flats. Many communities are updating their ADU policies in attempt to mitigate affordable housing issues.

It was the city’s understanding that an increase in livable ADUs would greatly contribute to diversifying housing options for permanent residents in Durango, as well as provide the opportunity for extra income to property owners.

With this diversification, both the individual renting the unit and the ADU owner benefit. In order to do this, however, Durango had some challenges to overcome. And they did so, with a two-part program.

But even with the policy change, only about 30 units have been constructed over the past five years.

“That policy change wasn’t the huge impact,” Shine said. “Really, it was the second part of the program which acknowledged existing ADUs and let people know that they’re a real, legal housing choice in our community.”

With hundreds of existing, non-conforming ADUs throughout Durango, the challenge for the city was determining how to treat those units and make them legal.

“Our goal with this was for property owners to have some sense of security that the city wasn’t going to shut down that unit. That way, they’ll be more likely to fix it up and maintain the unit well,” Shine said.

The city wanted to make it simple for community members to give information about their ADUs. Once they came forward, the property owner signed an affidavit saying the unit was safe for human occupancy and gave evidence of how long the unit had been in existence. Then, the city issued an acknowledgement form stating the unit is allowed to exist and can be used indefinitely.

This process didn’t happen overnight, though. It took them two years to collect information on all the existing ADUs. Part of this struggle was getting the community on board.

Some of the community’s concerns with the policy revisions were parking, noise, loss of privacy, and over-occupancy. To help buffer these issues, the city imposed regulations such as requiring one on-site parking space for a new ADU and limiting the size of ADUs to 550 square feet.

“Once we actually got to public hearings after doing years of public outreach, the hearings went pretty smoothly, and people supported the program once they saw we were paying attention to what their concerns were,” Shine said. “It took a long time, but we built trust with the people who were originally not wanting change, and things got easier because everyone knew what the goals were and which strategies would achieve those goals best.”

Another way to combat community backlash was easing into the adoption. At first, ADUs were only allowed in two historic neighborhoods, which eventually became three. Built in the early 20th century, the historic neighborhoods were already set-up for ADUs, including a system of alleys which could be used for ADU access and parking.

When the community could see that ADUs in the historic neighborhoods had little to no impact on the culture of the neighborhood, they were more welcoming when the policy expanded to mid-century neighborhoods. Now, every residential neighborhood in Durango is allowed some type of ADU. 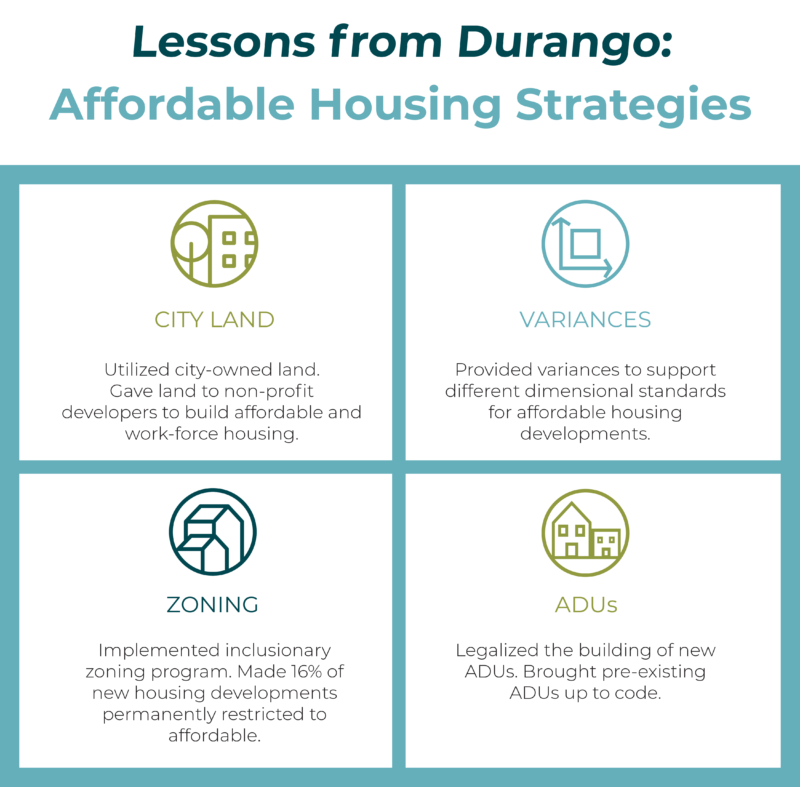 “It’s cleared up a lot of uncertainty in real estate transactions where somebody would want to buy a house with an ADU, and they would be scared to come talk to us. Now, if the property owner went through the registration process, they have a recorded piece of paper signed by the city that says it’s a legal unit,” Shine said. “So, the major benefit has been eliminated uncertainty. That’s also lead to some more investment into the units.”

With more up-keep, older ADUs are now a more attractive housing option for long-term residents in Durango. The prospect of building a new ADU also has some added benefits in making the community more affordable to live in.

“If someone doesn’t have an ADU, maybe they’re now thinking that this is a way they can make living here work financially,” Shine said. “If they’re stretched on their mortgage, that added rent money can allow them to live in town.”

Although ADUs have greatly benefited the community, Shine is cautious to say they single-handedly impacted their affordable housing issues.

“I’m always really careful about the fact that the ADU program was not a silver bullet. Just allowing ADUs or legitimizing existing ADU’s isn’t going to solve the affordable housing problem,” Shine said. “You work on it, and you mitigate it as much as you can, but it’s never going to be totally fixed. It’s always something we’re going to be talking about.”

Housing Hits: 4 Recommendations from Past Plans

Get the latest updates about how communities in the West are navigating the COVID-19 crisis and planning for recovery.